Built during 2000, the observatory consists of a 10' x 12' wood-frame building with a simple peaked roll-off roof. The roof sits on 12 rubber wheels that roll along the capping 2x4 of the 5' high walls. Below are some photographs showing the assembly and the final product. 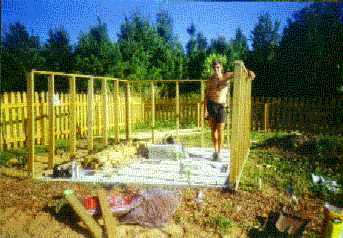 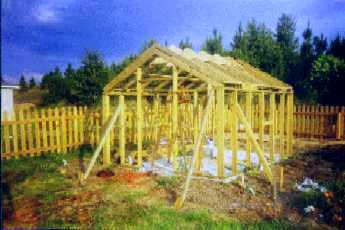 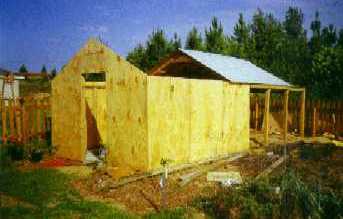 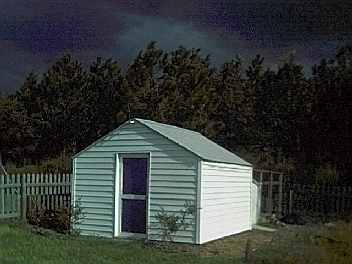 The observatory currently houses a Meade 10" LX200 on a standard Meade tripod and wedge. This has proved to be a very steady mount, though a custom-built pier may eventually be installed. The observatory has a low 18" square concrete pillar at its center intended for a large alt-az reflector that was originally planned.

Most of the wood used in the construction was pressure-treated, a minor additional expense that I considered very worthwhile, given Florida's well-earned reputation of heat, humidity, and insects. The exterior-grade plywood sheathing was covered with vinyl siding, a simple and fairly inexpensive covering that withstands the climate reasonably well. Stucco would have matched the neighborhood homes better, but I was concerned about additional heat retention, and also by my complete lack of experience with applying stucco!

All of the planning and actual construction, from the slab to the final screw on the door, was done alone. My wife was very tolerant of the time and money involved in building this, but I felt that actually having her sawing and nailing in the hot sun was a bit too much. Most of the construction was simple to perform, but the roof proved the most troublesome. It was built in place since I was (rightly) concerned about lifting it after construction, as well as the greater difficulty in ensuring a proper fit. The wheels were attached to the 2x4 bases, and temporary braces were added to maintain the proper separation and alignment. Then the angle-cut joists were carefully attached. The attachment of the joists to the base 2x4s, and to each other, proved to be the most difficult one-man task. It required some careful balancing and bracing to keep the various pieces from falling before the nails could be hammered.

The observatory has a dedicated circuit that was run when the house was built. PVC conduit was buried before the slab was poured, bringing power and data cables from the outside wall, where the main computer is located, to the concrete pillar at the center of the building. This keeps cables off of the floor, an important feature in the dark.

Originally a category-5 data cable connected the observatory to the computer network in the house. However, Central Florida is the lightning capital of North America, and long cables are very effective at collecting electrical surges from nearby strikes. After replacing a few hubs and a NIC due to surges, the copper line was replaced with a fiber optic cable and a pair of 100Mbps copper-to-fiber transceivers. The transceivers connect the now-protected network switches in the house and in the observatory. This network connectivity is vital since it allows remote monitoring of the images as they are collected by the computer controlling the CCD. There is also a Linux-based computer on the network in the observatory that controls the LX200 that allows remote control of the telescope.